Cabin fever is running rampant through my soul, as the melting snow reveals the bleak brown mud and not-yet-green grass outside everywhere I look. Bleak. I keep turning my thoughts to the lake, and how I can’t wait for the weather to turn warm, to see green and sunshine, and to pick black raspberries. I reached for a cookbook, trying to figure out something exciting to make for dinner, and the book just opened up to the pie crust page… so I took this as a sign, an all-American as Apple Pie sign, and I followed through. I will share with you here the recipe for a foolproof, flaky, butter pie crust, that doesn’t even need those tablespoons of ice water.

I made 6 pie shells in advance today, and froze them. I know, it’s so convenient and easy to just buy those ready-made pie crust shells, and just keep them in your freezer. But the list of ingredients is horrible. To entice me, and maybe you, to make your own pie shells, this recipe here uses less fat than most pie crusts, and incorporates oats and or nuts to give the crust a nuttier flavor, while boosting the nutrition. Here’s a close-up of the crust… you can see the flakes or oats, that will taste heavenly once they undergo that baking in the oven. 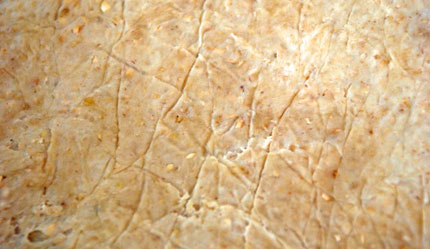 Meanwhile, the boys punctured the silence that comes along with baking with their acts of wrestling and screams of “He took my lego,” when there are exactly 1,529 other pieces exactly like that one in the tub. (I’ve picked them up enough times to know.) I’d like to add something here. If you have never raised little boys, you may be under the mistaken impression that I never see them all day. You may envision them outside, braving the elements in all kinds of weather, just to quench that male-driven desire to explore and conquer. The truth is, rarely… I mean rarely, are they outside. For some reason, they prefer to stay inside, always within earshot, as they build their skyscrapers, their trains, sneak crackers out of the cupboard, all the while leaving amazingly huge messes.

They pop by just long enough for a scoop and a pour. 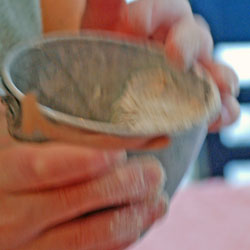 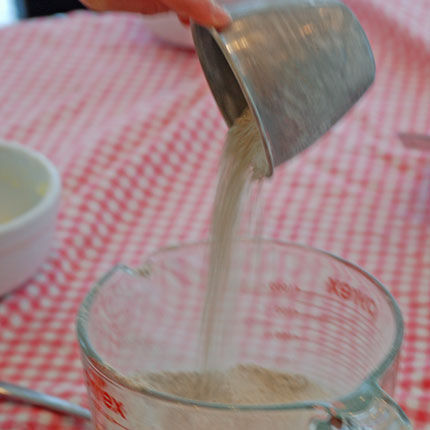 I love their little hands. It would be nice if they played outside, though, once in awhile.

Meanwhile, as it is President’s Day after all, I did my Patriotic duty and tried to stay focused on the task at hand.

Here’s the recipe for one low-fat, foolproof 9″ pie shell:

If you want to quadruple this recipe, which I highly recommend to save yourself some time, just multiply all the quantities times four. Today, I multiplied everything by 5, and ended up with six shells. (Might have had something to do with all the distractions I had today with the Legos?) 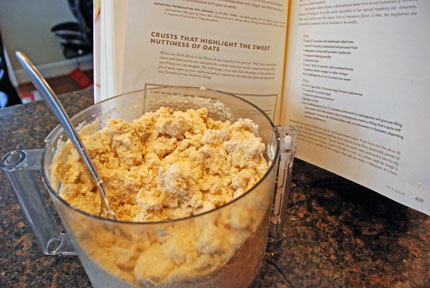 Now the fun part, the rolling: 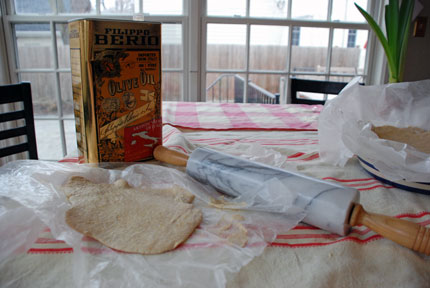 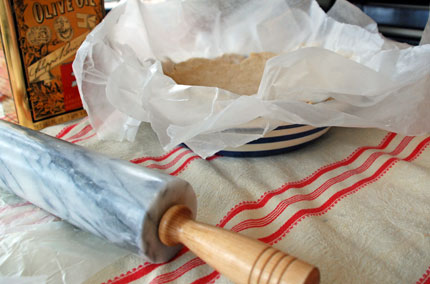 As we still have black raspberries in the freezer, I made a black raspberry pie tonight for dinner. My favorite way to do the crust is to fold the crust over the top, so the pie is in almost its own little pouch. However, this leaves no dough leftover for pinwheels. On second thought, Mom only had two kids fighting over pinwheels, and maybe scraps of dough was all she needed. I guess I’ll have to devote an entire pie shell to pinwheels.

In honor of your country today, make yourself some pie. 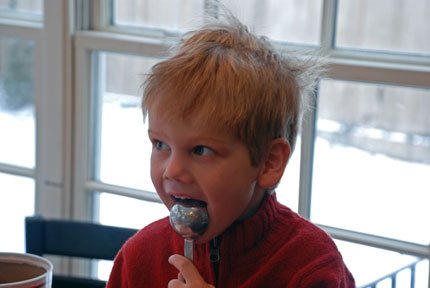 That Beauty That Comes Only From Time Passing
I...
Nothing and Everything Good About Sugar Cream Pie
T...
The garden store pond
...
On Any Given Tuesday
&...
It's Not As Bad As My Imagination Tells Me It's Going To Be
H...
Gold Coins are Hard To Find
W...
Share on FacebookShare on Twitter
Eat, holidays, Life
7 comments to “Celebrating Presidents Day With, What Else? Pie”