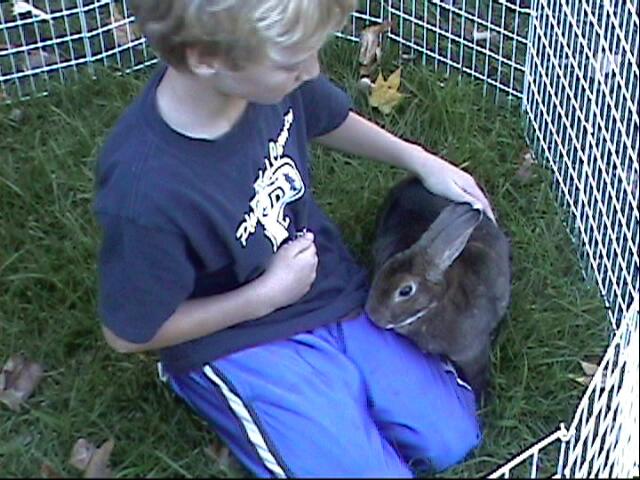 This Best Shot Monday is about the picture I didn’t take. The picture I thought I would take on Sunday; but Sunday was too late. I was fortunate enough to grab the video camera. This picture was captured as a .jpg from the video. I really thought I’d have time to get some great pictures on Sunday.

I’ve mentioned Brownie briefly before. Brownie is the class bunny that my 9-year-old son loves. During “silent reading time” my son sits by Brownie’s cage on the floor, and quietly reads to her. He grabs carrots and puts them in his backpack for Brownie. He talks about Brownie at least once a day. He tells me facts about rabbits I never knew.

He has been counting the days for his turn to take Brownie home for the weekend. As we carried Brownie out to the car, parents and students in the hallway waved to Brownie, and said, “Have fun!” In her 6.5 years, she has visited many of the families’ homes in our neighborhood. She is well-loved, and could easily pass as the school mascot. The boys were so proud to be taking her home.

The boys squealed with delight. You can see it all here in a video here and here. She looks so alive. On Saturday, when I put my 9-year-old to bed, he seemed a little gloomy. He said, “I can’t believe it’s almost Monday and I have to take Brownie back to school.” Yes, I said, but aren’t we on the schedule again in two weeks? Yes, he smiled when he remembered.

Less than an hour later, thankfully, after the kids were asleep, Brownie left us. It was very fast and quick — I can only describe it as a seizure. If I had been out of the room, I would have missed it. I would have found Brownie “asleep” and I would have went to bed. Then, my children would have tumbled down the stairs in the morning eager to play with Brownie…

Can you imagine anything worse? I’m grateful the children were asleep. I’m grateful I was with Brownie. She didn’t die alone. I called, and got the teacher out of bed; she took Brownie home so Brownie wouldn’t be here when the children woke. In true spirit, as she fought back her own tears as she said, “Well, I guess it’s time for the class to learn about the cycle of life.” As we stood talking, I felt a very cold. And then I remembered, I had just opened the door for her a few minutes before. Later, when I opened the door for her to go, I realized, it wasn’t THAT cold.

What to say….. that was a difficult one. My great friend had the perfect words. “Brownie was tired, and possibly ill, and felt comfortable and peaceful enough to die at your house. And how fortunate that she died in a home where she was loved, and not all alone in the classroom.”

Yes, we are all grateful for that. My littlest guy, keeps saying, “I just want to hold Brownie. Just one more time.” And my son, my 9-year-old, he took it hard. Today, just send him a kind word of comfort in the comments.

I didn’t want to touch that video in my camera. I haven’t finished the videos from fall 2006, and I vowed I wouldn’t start another video until I’m caught up. My son was so sad; and I thought here is the motivation I need to get one video done. If I don’t do this now, I will never have the desire to watch this video again, and it will sit on the tape unwatched, forever. I’m not going to procrastinate, like I did with the photos; I’m going to pull this video out of my camera, edit this and have this one tribute of Brownie for my son. Just comments of comfort for him.

I Don't Ask For Much
J...
Appropriately Dressed
...
Top Ten Pilates DVDs for beginners and beyond
T...
Gives Beleaguered A Whole New Meaning
F...
You Are A Delight
I...
I Wanted to See His Name... Not Just Touch It
"...
Share on FacebookShare on Twitter
clean, Life, Tears, You Tube
31 comments to “Brownie was loved”