That you find on the web.Â  I’ll show you why in a minute.Â  For now, let me just say, I have had a NIGHT. A night that just wouldn’t go away. First, there was the science fair project, that my brother saved.Â  My son’s project, portraying how Edison perfected a light bulb by eliminating oxygen, would not “spark.” ( You do understand that Edison did not invent the light bulb; he merely perfected it, right?) 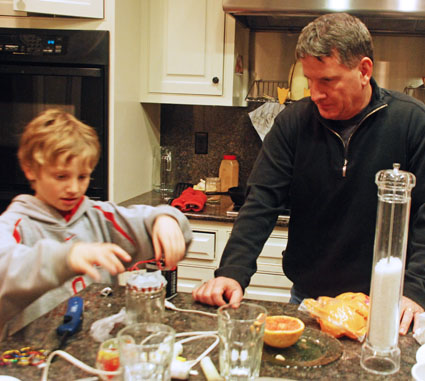 My brother, always good to haveÂ  a knowledgeable electricity expert in the family, simply used clips to make the connection tighter.Â  My brother went out of his way to help us, and I promised him and his wife dinner, except, that I didn’t think it would be that night…so I was unprepared.Â  Hubby wasn’t going to be home, and I had hoped to get buy with cereal and pop tarts for dinner.Â  Although, that’s probably what my brother would have preferred anyway, I cooked away and offered him his first taste of asparagus.Â  Which, surprised him.

There was also the running my older son to basketball practice to one of the farthest gyms. On the way, he mentioned that he needed me to get him some air dry clay.Â  Sculpey clay.Â  I made a mental note, thinking and wondering where in the world would I manage to find the time to run to the far ends of the earth to Michaels to buy that?Â  I dropped him off, and scooted back home to relieve my brother from babysitting.

When I picked my son up from basketball, now close to 8 p.m., and my bedtime, he said, “Did you get my clay?”

“Clay?” I said slowly and surprised.Â  “Don’t tell me you need that tomorrow?”

We can make this at home, with the help of google.Â  To my delight there were several recipes for air dry clay.Â  One of my favorites, which I will not link to, to spare you a similar fate, was 1 part cornstarch to 1 part glue.

He said he needed his sculpture, a bunny, to be BIG.Â  So, we poured four cups of cornstarch and four cups of glue into the bowl, and I told my son to realize right now how much he was loved by God, because that was exactly how much cornstarch and glue we had in the house. And the whole time I’m doing this, I’m unable to give my little boys the attention they need all night long.

Two hours, and very sticky hands later, I was able to pull my hands from the bowl.Â  I’ve been peeling the glue off from the top and underneath my fingernails ever since.

The bunny was, in a word, a disaster.Â  Our family has really, never had good luck with bunnies. The recipe instructions said the sculpture would take a couple of days to dry; and I feared the bunny would not be dry in time.Â  So, I microwaved the bunny.Â  In one half of a Mr. Potato Head plastic shell as the mold — to give the effect of the bunny sitting down in the grass.

What? You don’t think this looks like a bunny? 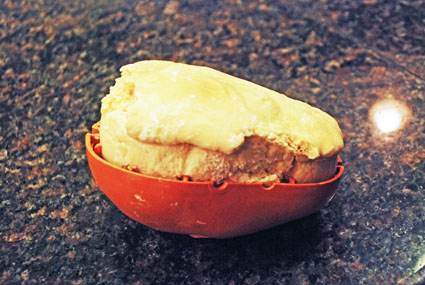 Sometimes, I wish Super Nanny would step in and just stop this madness.