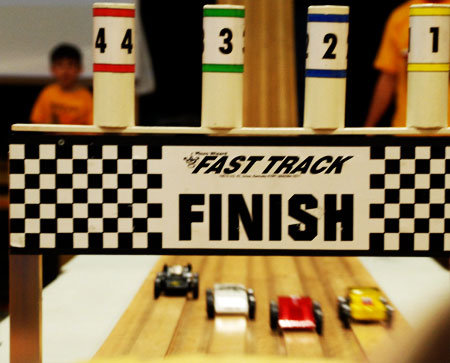 That red car up there is the 10th Pinewood Derby car my husband has built. When all is said and done, my husband, God-willing, will have built 17 Pinewood Derby Cars in total for our four boys over 11 years.

Two of our boys were competing in this year’s event. Here, our youngest one (too young to enter) is peering over the finish line. If you have been to a pinewood derby event in your lifetime, you’ll know that the entire atmosphere is overwhelmed with male testosterone. Truly a little boy’s initiation into their first “manly event,” as evidenced here by the appearance of man’s universal “tool,” duct tape. Foam wrapped in duct tape is used to cushion the cars as the pummel into the end of the finish line. 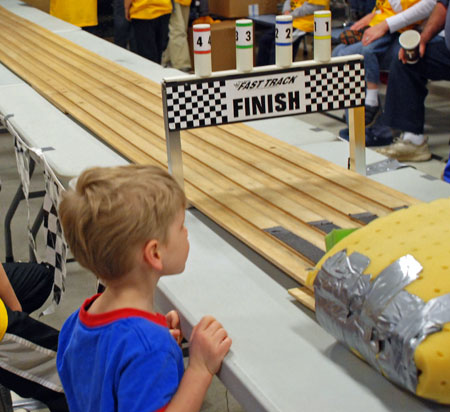 There is a table set up on the back wall filled with scales (each car must weigh exactly five ounces — no more, no less) with power drills and lead to give weight to cars that are too light. Here is the wooden podium, which will soon to support the first, second and third place winners for each event.

The wooden track is somehow rigged with a sensor that instantly displays on a computer the first place winner for each race. Each car will race several times, switching to a another one of the four lanes, each time, racing different cars within your age group each time. The goal, of course, is to win as many of these trials as you can. 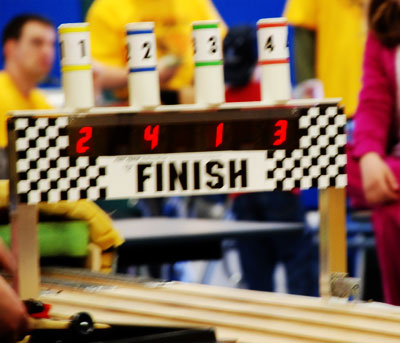 This is how a kindergartner looks when his car wins. Not just one, but each and every one. First place. 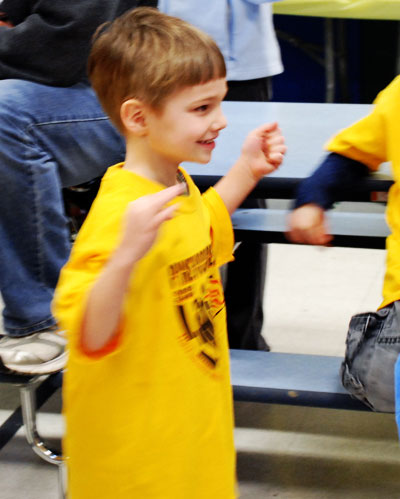 It’s one thing to see the excitement and almost bewilderment on a kindergartner’s face the first time he sees his car actually in a pinewood derby race. It’s quite another to see him win. As the Mom of this middle child, where so much of what he has is handed down, I was pleased to see him have this sweet victory.

Here’s his car; the red one, barreling down the finish line. 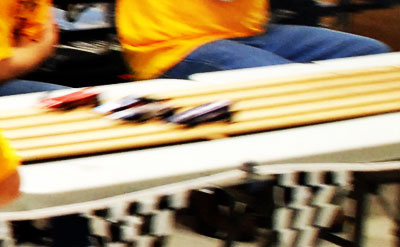 Our third grader was set to race in just a few hours. In those few hours between races, sibling rivalry showed its ugly head. It was difficult for him to accept his kid brother’s victory as a gift — no, I think, impossible. Instead, he felt that as a veteran pinewood derby racer, he should at least be able to beat his kid brother. Irrelevant, to any of them, that the outcome of the race was basically “out of their control.” The real outcome was determined by the design of the car, as compared to the design of the other cars racing that day. And, of course, the track.

His car is the green one.

Speeding past here, and he too did remarkably well. Soon the jokes started to fly about how my husband, who has built so many pinewood derby cars by now, probably has a “just-in-time” factory set up in the garage, and has the whole manufacturing down to a science. 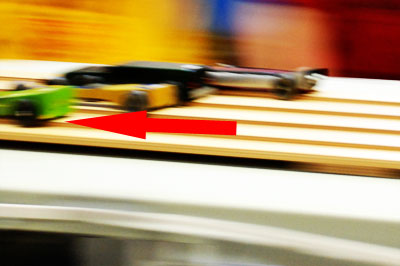 In the end, the big brother came in second place overall. So, remember that podium up at the top? This is how we filled it… and number three went to our littlest one, who has yet to compete in his first.

And where’s our oldest? With his own pinewood derby cars in his past, he’s now too cool for this stuff now.
See more BSM’s here.

What to Buy for A Wedding Shower When There's No Time to Shop
I...
The Beautiful After-Christmas Barren Halls
I...
Can you believe "the talk" subject has two names?
I...
I try hard to spare my brother's feelings
I...
Tag-A-Long Rosie
...
A letter to the Class of 1958
M...
Share on FacebookShare on Twitter
best shot, clean, Life, memories
25 comments to “Beginner’s Luck”