Well, I finally did get that cup of tea… but I had many miles to go, and a high price to pay before I got it. 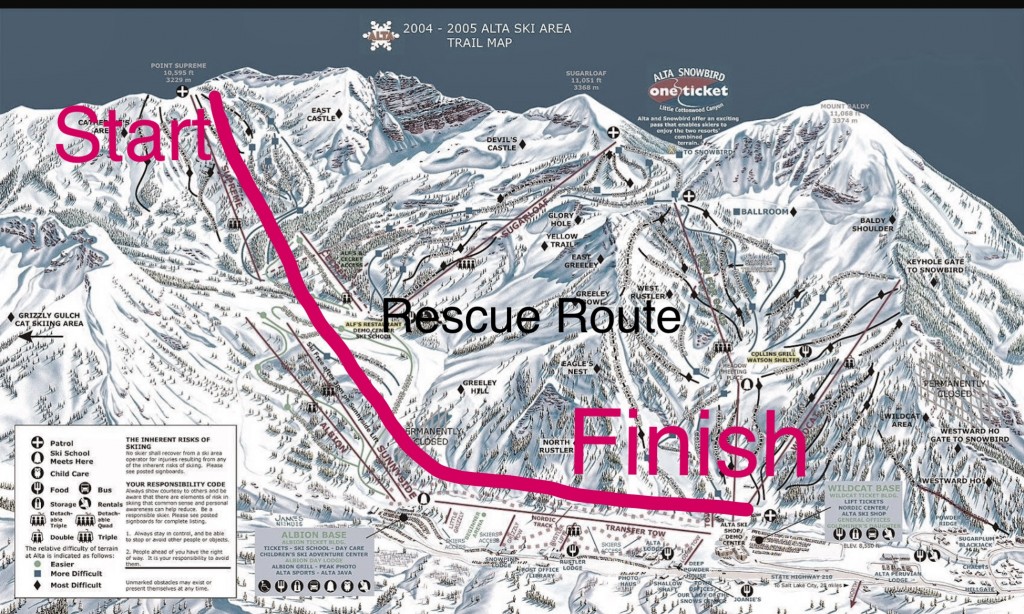 When the pain subsided, a guy from the mountain rescue team asked me to stand. He took one side, and my son took the other, and they pulled me up. Surprisingly, I was able to stand. “I heard him say, maybe it’s just a minor sprain and you can get down the mountain by yourself.” Except that I was so, so, very sick and weak, and I collapsed right back down. I was so beyond sick. Lying in the snow, I kept scraping the snow to ice my very sore knee with my very limp arm, and almost unable to utter the words to my son, “Ice, I need ice here…” I just couldn’t get that spot cold enough.

The medics asked for my name, and I was too weak to speak, so I motioned for my son to answer, but the medics said, “You need to be a big girl now and talk.”

I could talk, I was totally coherent… but I thought it might be best to save my strength. At the same time, I had the same zero amount of strength to argue with the man in red, so I just whispered the answers he needed. I do remember him asking me if I were claustrophobic. “No.” I like cozy spaces.

I was strapped in a sled, and I could see nothing, except red. The medics wore red, my son’s ski pants were red and the sled was red, and the tarp I held was red. The medic grabbed a piece of the sled’s tarp and pulled my arm out of the cocoon-type arrangement I was in the sled, and told me to hold this flap with my hand, to protect my face. It was a cold, blustery day with the kind of ice snow that hits you right in the face. I heard lots of things before we took off, but couldn’t say how many people were there, how the medics were involved and what they were doing. Later, my son told me, the sled was attached to another medic, who skied us both down the mountain, as he navigated the steep hills, around trees, with the sled behind.

We finally stopped, and I heard them say we were moving to a snowmobile. We had apparently moved down far enough to be in an area where a snowmobile was possible –. I looked up at my son, and I said, how much longer? And he sweetly said, “We’re halfway down.” Good, I thought. But later, I learned he lied about that…

But still, my spirits were buoyed by the fact that the snowmobile was much faster than a skier, much safer than me on skis, and we would be in a safe, warm place soon enough. The medic from earlier asked me how my pain was – and given that my knee had been in traction , down a bumpy sled ride, I answered that the pain was getting more intense. To which he replied, “You must have a very low pain tolerance.” When I shared this with my surgeon, his mouth dropped and said, “You should’ve told him to F OFF.”

He also made a comment to the snowmobile driver about my address being Ohio, and that maybe they shouldn’t be taking a Buckeye down the mountain anyway.

But the snowmobile ride was not quick. It took forever. The snowmobile did not have a straight route from A to B. Because of the hills, it was a back and forth ride down the hill. I’m sure I lived half a lifetime on that snowmobile, in some sense of time warped time-travel. Yes, I do like cozy spaces, but I was in desperate need of medical help. I was worried, and I was so, so, bitterly cold. I had not moved for – I have no idea how long now, and my back was so close to the snow as we flew down the mountain. The hand that was holding the tarp was taking the brunt of the wind, ice, and snow, and I tried to move it in closer to my body, only to expose my face to more of the wintry onslaught.

The snowmobile stopped and started several times… giving me the false sense of assurance that we were finally to the hospital. This happened so many times, that I knew I had to take immediate action to keep my spirits from dropping, and to keep myself from having a panic attack. So I devised a story. I told myself that this was it. I was in orbit somewhere in outer space, and there was no end. I would be traveling around like this for the rest of my life, so just enjoy the ride and think about something else. Stop getting your hopes up every time the motor slows down. I just wanted to sit up and look around and see what was going on.

Still, we weren’t at the bottom – which I later learned, we were, we just had so much ground to cover to make it to the hospital.

My mind game worked, and I stayed buoyant and in high spirits… as much as could be expected.

Napa: Business Style
I...
When the Jelly Beans Started Rolling, I Realized I Had Done Too Much
T...
The day Texas soil blew into my eyes
...
Thriving Instead of Enduring: How To Transform What You Hate into Power
S...
My Journalism Degree Needs a Bit of Tweaking
&...
Making Pastilles, or scented stones
I...
Share on FacebookShare on Twitter
Laugh, Life, memories, Tears, travel
One comment to “Are You Claustrophobic?”