And then, out of the blue, we ended up having the best time in such unexpected ways. The oldest met the youngest at the lake. Just the two of them — which made us a balanced, rounded out family of four. Which was different… the meals needed to be adjusted, there is less of them — and yet there is more. The two of them were able to stand out.

We arrived on Thursday with the youngest one, and there was a lag of a day and a half before the older one would arrive. But instead of figuring out a way to keep him entertained, he jumped out of bed early Friday morning, and headed out to go fishing. Â  Which, was pshew! Because that liberated me to focus on some very necessary client work that I needed to attend to. But alas, let’s no breath that easy yet, because he came back to the house, dripping wet, because he dropped is iphone in the water, and he was soaked and drenched recovering it. So much for dry clothes Â  We ended up right back where we started. Â

All of his “street” clothes were soaking wet, and now he wouldn’t even go to town with us, one of the pre-planned activities I had in mind to keep him busy, because his clothes — and shoes were wet.

I gave him my iPad as “life-support,” and I took his phone, shut it down and quickly put it on rice and the dehumidifier. It was a nightmare just trying to keep him from opening it up — but letting those wet electrical currents run through that phone is as close to frying as you can get. So, I just kept it off and on the dehumidifier and kept telling him everything was going to be fine if he just left it alone.

I didn’t even believe it myself, but it just kept coming out of my mouth.

When the older brother arrived, they went tubing together, and it was quite surprising to see those two working in the water together in a way that I had never seen before. The little one isn’t so little, and they could actually compete — when the oldest tried to jump the younger, the younger, just sped off his tube. They laughed pretty hard… 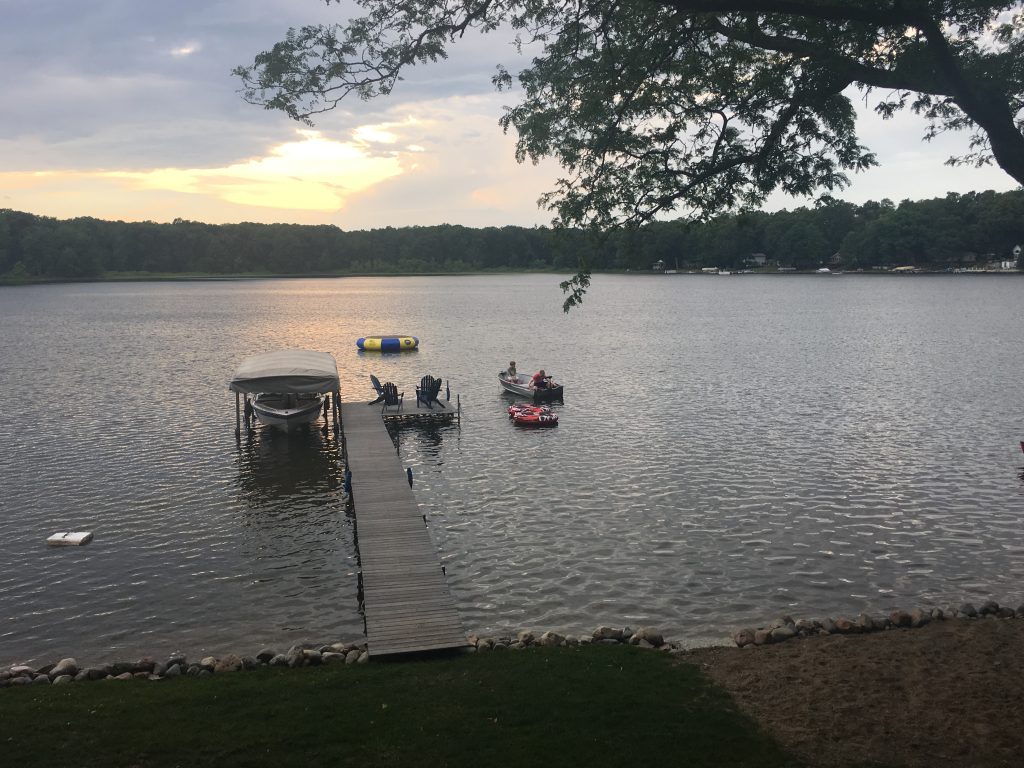 Then, I cooked dinner — and here was a stumper — there were no “dietary and taste” accommodations to make! They loved, and ate, everything I made, straight out of the kitchen.

Then, the oldest and youngest went out into the fishing boat together, and although they didn’t catch a thing, they stayed out there and talked for a little over two hours.

Then the campfire, more funny stories, the neighbors came down to catch up on the past winter, and the oldest kept everyone in stitches with his one-liners. Before we knew it, it was 2 am.

By Sunday, day 3, of the phone on the dehumidifier, the screen came back and everything looked to be working fine. So, I surprised myself, when that mantra that I kept repeating, everything will be fine, Â turned out to be true. Â But, I said, just as a precautionary measure, let’s keep it on the dehumidifier one more night, just to be safe.

And would you believe that the phone fell off the dehumidifier, onto the basement floor, Â and the screen cracked.

The magic of finding wild mushrooms
/...
Grow Better Veggies With Companion Plants
A...
Is Santa Real?
T...
Things Are Bad When
M...
Puppy's First Day At The Lake
Y...
My kind of Morning
F...
Share on FacebookShare on Twitter
clean, Laugh, Life, the lake house
One comment to “And Then, Rest And Laughter”