Instead of bringing in the New Year with resolutions, dreams and glitz, we started the Eve with purging. First out went the trash, then unneeded furniture, outgrown Lego tables, desks and stools were carried out of bedrooms. They had no place to go. They are piled up in the garage and porch. Yet, in the living rooms, the bedrooms, we have a clearing of space.

Next came our bodies. One by one, as the night went on, half of us came tumbling down with a virus. A flu. Something that hasn’t visited this home in over 4 years. We were unprepared, and the little ones unfamiliar with the finer aspects of “how-to-vomit.” It appeared in places in shouldn’t have. Upholstered, carpeted surfaces. I explained the value of hard porcelain… and how there, it can be cleaned. And, no you are not going  to die.. and yes, your legs can run there, even if you feel like you’re dying.

I did hear the words, from a small suffering one, kneeling, simply, “I am miserable.”

We struggled to find the courage to drink water straight — without pain.

On New Year’s Day, we recovered, and Bodes, achy and weak. We swallowed lots of Ginger Ale, and Ginger Bug, and when I felt better, even some Beet Kvass.  I was asked to make cans of soup — once made, and served, I was met with. “I’m not going to eat this, because I think it’s going to make me sikc.”

We made no goals — we were pleased to get through the day. I scanned FB posts from friends, and saw a few posts about people saying instead, “what they vowed they would not do,” instead of what they would do.

That idea swirled around in my mind.

By 7 pm, I was feeling much better, the little ones were not.  But, I was in the kitchen, mixing up batches of sourdough bread for tomorrow, and cleaning up the mess from the day. I even pulled out the leftover Gingerbread cookie dough and we started making cookies. I had so much to do. So much to do. 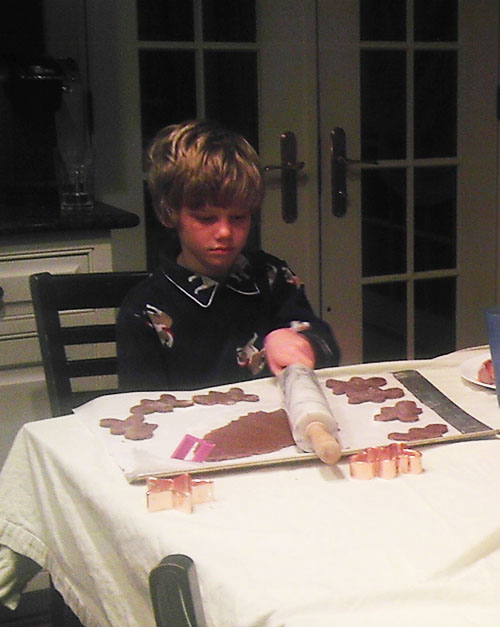 I thought of Fun Size asking for that massage, hours ago. Then, I was sanitizing bathrooms. Now, he’s in bed, and I’m cleaning the kitchen. I would go and massage his achy legs, if I didn’t have so much to do.

And then, I realized, this is where it starts. This is where the change starts – – and we are given a million of these opportunities all through the year. But, fresh with the New Year on my mind, I grabbed a kitchen towel, and dried my hands.

I left that pressing  mess in the kitchen, and walked straight upstairs and sat on his bed and started rubbing his legs…and we talked…

and the kitchen simply waited for me.

What Watching The Vietnam Draft Was Like
S...
We've Had Lots of Rain
E...
The Visit
...
Time makes a toy cool
M...
Gifts at 5:30 AM
A...
A weekend
&...
Share on FacebookShare on Twitter
clean, holidays, Life, love stories
2 comments to “And, the kitchen mess just waited…”