I made cinnamon rolls yesterday. Once I pulled them out of the oven, I went to the basement to throw in a load of laundry while the rolls cooled. When I came back upstairs, the rolls, unguarded in a house full of boys, were devoured. This was all that was left. 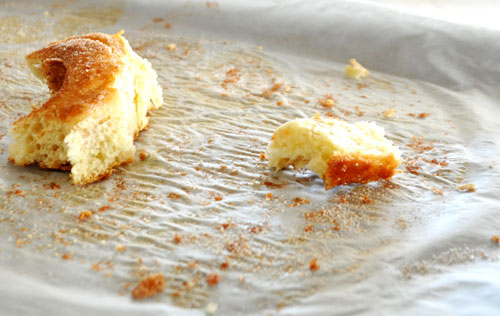 Truly, I was looking forward to taking a bite of these rolls, as they were lower in fat than most, using natural lemons to flavor the rolls, rather than loads of butter.

Boys do such a great job of cleaning house. Not really cleaning house, I mean, but more practical. You can bake all the cookies you want without fear of getting fat from them, because the boys will have eaten them all before you’ve had a chance to eat just one.

All traces of fat and sugar disappear right before your eyes. I guess life does the same thing to people. Like the currents of a river that cuts away the hard edges of a rocky cavern, life plows through people, cutting off the hard edges, softening and molding us into compassionate human beings. Other times, when a person is too rough for a river, the entire person can just get whittled away into nothing. They weren’t as tough as they appeared… unable to withstand the tough currents, to stand by and keep their own mouths shut through the thick of the waves. They were swallowed whole by the river. Maybe that’s for the best. Because when the waves settle down, you can look around and see that all that is left are those that really matter.

Here’s the recipe for these lower-in-fat cinnamon rolls, modified from The Bread Baker’s Apprentice: Mastering the Art of Extraordinary Bread

1. Cream the sugar, salt and shortening on medium-high speed. Add the egg and lemon extract and beat until smooth. Then add the flour, yeast, and milk. Mix on low speed until the dough forms a ball. Switch to the dough hook, and increase the speed to medium, mixing for approximately 10 minutes, or until the dough is tacky but not sticky. Lightly oil a large bowl and transfer the dough to the bowl, rolling it around to cover it with oil. Cover bowl with plastic wrap.

2. Let rise at room temperature for approximately 2 hours, or until the dough doubles in size.

3. Lightly spray counter with oil, and transfer the dough to the counter. Roll out the dough with a rolling pin, lightly dusting the top of the dough with flour. Roll it into a rectangle about 2/3 inch thick and 14 inches wide by 12 inches long for larger buns, or 18 inches wide by 9 inches long for smaller buns. Sprinkle the cinnamon sugar over the surface of the dough, and roll the dough up into a log, creating a spiral as you roll. With the seam side down, cut the dough into 8 to 12 even pieces, each about 1 3/4 inches thick for larger buns; or 12 to 16 pieces each 1 1/4 inch thick for smaller buns.

5. Let rise at room temperature for 75 to 90 minutes, or until the pieces have grown into one another and have nearly doubled in size.

6. Preheat the oven to 350 degrees F with the oven rack on the middle shelf.

8. Cool the buns in the pan for about 10 minutes, and then glaze the tops. Remove the buns from the pans, and place them on a cooling rack. Wait at least 20 minutes before serving.

How To Photograph The Solar Eclipse Without Damaging Your IPhone
T...
Comfort Food -- Because We're Stressed
Y...
I need less power
I...
The Lake House, Part I
M...
The Essence of Things
I...
Cookbooks as Treasure Maps, and the Healing Power of Pie
E...
Share on FacebookShare on Twitter
Eat, Life
One comment to “All That Were Left”