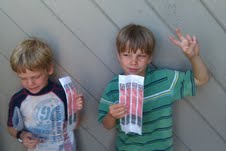 Shot from my phone.

Anyone who has hung around our house within the last 365 days is well aware that there is a Beatles revival going on our family, eight days a week. There are Beatles tunes bounced around from Ipod to Ipod, Beatles trivia questions, and the endless, “Mom, why didn’t your parents take you to a Beatles concert? When you were 2?” We even read Beatles history books as read-alouds.

Purely by chance, we heard about the Beatles Tribute band, 1964, coming within 20 miles of our lake house for a special summer concert. We got tickets, and hoped for the best.

The looked like the Beatles – with the pointy-toe boots, the straight-legged pants and jackets… and the hair! Perfect. And the sound, incredible. The little boys sat with their hands crossed the entire concert and never took their eyes off the stage. I felt something bump me, and looked over to see that my littlest boy had his air guitar out, but once he saw me smiling, he put it away.

The older boys, the most skeptical of the bunch, smiled. My teenagers were smiling… in public, with their parents. Pure bliss. Could you ask for anything more?

The only mistake we made of the entire night, was taking the boys down on the floor… so they could dance. This also gave us a “better look.” Big mistake. From there, they musicians, although quite talented, didn’t look like the Beatles anymore, and the illusion was a bit shattered. So, we closed our eyes, tried not to peek, and enjoyed the music.

And Then It Suddenly Dawned On Me
F...
How I Learned The "4" Is Way More Important
I...
Snippet of Winter
"...
How To Cook Dinner on A Dreary January Night
O...
Who is that Oliver Guy Anyway?
"...
If I Had A $100
I...
Share on FacebookShare on Twitter
clean, Laugh, the lake house
2 comments to “Ain’t Got Nothing But Love”