I know I promised everyone that we would relax. But who has time for that? Because we have our list of things to get done. You know that feeling of having something just within your grasp… and then you have to let it slip through? I felt that for a few days. How was I ever going to get this work done on just the few days I was given, while recovering?Â  Well, it just happens to get done. Reluctantly, I’m bringing many of the projects I’ve been working on up here at the lake to a close. Checking my list, I see many of the things I listed are done — plus I accomplished a few extras. 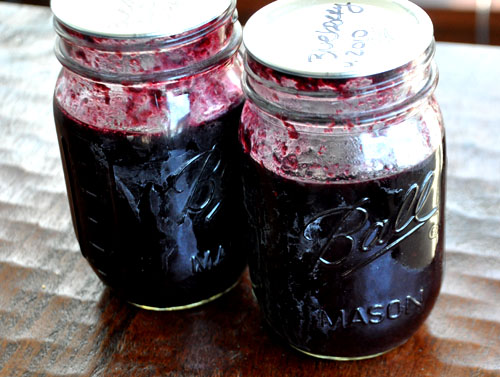 The was last, but not least. I should have just saved this for some other less-hectic time (when I was feeling better), but it was on my to-do list for the week. I canned jam — from berries from last summer. My freezer’s getting full, and I wanted a way to preserve these berries for longer – and store-bought jam is so expensive. I’ve made freezer jam before, but never “canned it.” I used this recipe… from Alton Brown. I watched hisÂ  you tube video over and over, and over. Then, I watched some more videos on canning. I was so nervous about it. My aunt’s canner blew up once… of course, she was doing beans, and not jam… but the memory is still fresh. I brought all the stuff up (including the magnetic lid lifter), and started canning at 9 p.m. I tested the last lid at 10:30 It went so much faster on the you tube videos. I got so caught up in timing everything, and watching to make sure I had everything sterilized, that I think I neglected to watch the jam as closely as I normally would have. I don’t think the jam set, as it looks kind of runny in the jar — but it’s good! Next batch will be blackberry jam.

The keyhole garden. I managed to get my teenager to collect the rocks!!! My teenager put his muscles to work and did some heavy lifting and brought me four or five loads of rocks to create the garden. (Thank you so much, and I’m so proud of you.) He brought me enough large-sized rocks to make the five-foot diameter circle — one level. From there, I used the string to lay out the rocks. I used some pine logs (leftover from the electric company that came by and did some trimming) to create the entry. My son even found a heart-shaped rock that I’m using as the entrance. And no, it is not pretty right now. But it will be. 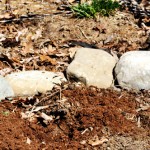 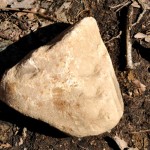 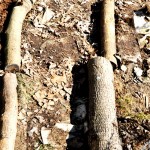 Spring Cleaning. Swept the ceilings, walls and corners to get rid of all the cobwebs and spiders. Then, washed and dusted with peppermint oil to keep the critters out. The place smells clean.

Changed bedding for 7 beds and did lots of loads of laundry.

Took the kids to my favorite store, Rural King, full of all those hard-working American Farmers. This is the only place I know where you can buy burlap bags, (just try to buy a burlap bag in the city!) and chicks are for sale in metal feed troughs. There, I got some burlap bags (for some container gardening plans), chicken wire, onion sets and aged manure.

Ruined that fun moment by visiting Wal-Mart, where at the check out, a girl (a pretty girl, about 22) was proclaiming loudly, with a smile, “Yeah, I just got out of jail! I was in for 45 days!” The boys were so confused. “Why is she smiling? Why is she bragging about that?” I just kept thinking, “and this is exactly why were growing a garden, so we don’t have to come back here.” Then, I thought about going back to Rural King to pick up some chicks so that we could have our own eggs….

Cooked, and cleaned up for these boys all week. What a chore that was… could barely get another thing done!

Wrote my column for the newspaper.

Built a fence for the garden. This was hard, took much longer than I had planned. Of course, the day I did that, the wind was blowing and whipping at my face the whole time. The boys disappeared during this project. At the time, I wished I had a post digger – and real posts. I simply used the chicken wire (which is very hard to keep unrolled) and some big broken branches I collected walking through the woods. The branches are flimsy, kind of tilted… the chicken wire holds up the branches! Then, my son said, “Mom, the bunnies are just going to tunnel underneath your fence and get in.” He might be right? So, maybe my teenager will collect me more rocks to keep them out from the other side? 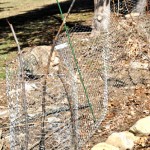 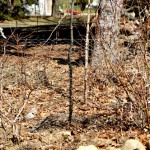 Made the compost basket for the center of the key hole garden — already loaded with fruit scraps. I used chicken wire to make a circle, and then wrapped it in burlap. Then, I created a hole, and buried it a few inches into the ground. 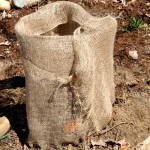 Organized. Devised a new clothing storing system for the boys. All summer, the boys usually just drop their wet bathing suits on the floor ( leave them) and pull something else out of their drawer. Four times per day. By nightfall, they have no clean clothes left… even though they started with a full load. My “control measure” has been to make sure there is only 2 shorts and shirts in their drawers per day. But, I think by using some open shelving and wire baskets, they might be able to keep things in once place.

De-cluttered, and took two bags full of clothes and stuff to Good Will.

. (What a contrast this was!) The big city version of Little House on the Prairie – a narrative how-to for surviving the Great Plains, only for the concrete jungle. How to buy an apartment, even though you have the $20 million, but you just don’t know the right people, and why you still won’t get the parking space. How to work around historical codes so that you can have an air conditioner installed in your high rise building (cut out the bottom of the French doors), and how to get in to an invitation-only funeral. And, if you’re a pre-teen, how to set yourself up as the resident computer expert, and earn $100 an hour. The career paths of investment bankers, movie stars in their waning years, best selling authors and full-time socialites who live and die by the pages. Plus, what to do when all that money no longer seems to feed the soul. Amazing book, and the characters makeÂ  it impossible to put this book down. I can’t imagine living so high up in the air all the time, surrounded by concrete. With kids, too? I sound so provincial.

Checked the Farmer’s Almanac calender and found that I had one more day for planting before it was time to leave. So, I planted the onion sets, the beets, carrots and spinach. The wind was blowing, it was raining and cold, but I got them planted, just before sunset. Then, the next morning, I realized I could plant my seed potatoes… in burlap bags… more on that later.

Quickly transplanted a lilac bush. This one particular perennial garden bed always bugs me – it just doesn’t look right, and it leaves mud all over the sidewalk. With the bush moved, I dug up the perennials (moved some of the bulbs) and replaced everything with new sod (from my garden spot). Problem solved.

Reading The Hardy Boys… to the boys at night. We have no TV. I’m the entertainment.

I read until my voice hurts. They sit so quiet… my favorite part of the day. I always end with a cliff hanger — they hate that!

The funny thing is, if I had another week here, I’d find the some other similar list, and be just as content doing it all over again.

Velvet water
T...
Razing Frogs
"...
Help! I Can't Keep my Houseplants Alive!
...
The sound of rain on the lake
&...
Someday, I will have a pretty garden
M...
There Was a Bit of Fog This Morning
...
Share on FacebookShare on Twitter
Gardening, the lake house
2 comments to “About that relaxing…”