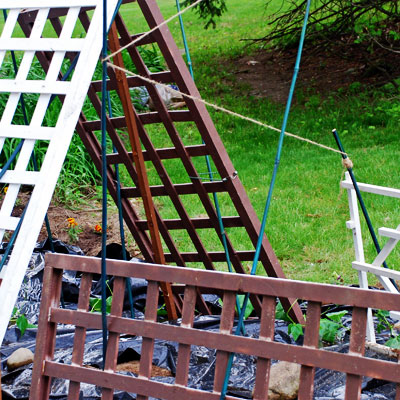 This is by far the ugliest fort I’ve ever seen
But like my son says, “At least we have a fort.”

Since my oldest son began to walk as a baby, I’ve had this dream of building/growing a fort out of beans for him. Lack of sun and space has always stood in the way. Funny. Now that I have the space and the sun, he’s old enough to help me design the fort… and perhaps, he’s now too tall to stand inside.
Using whatever tall sticks, old wood and broken furniture the previous owners left behind at the lake house garage, we built the fort. This bothered my Father quite a bit. He would have preferred that I buy a $45 aluminum rose trellis, so that the fort would “look nice.” This would have given the structure the “curves” it needs to give the fort that cozy feel. Based on how ugly this fort turned out, I’m sure my Father may have been right. Yet, something about the pristine rose trellis didn’t feel right… too pristine? I felt compelled to use the materials that were readily available… it seemed more “green.” Still, my 9-year-old said it best, “At least we have a fort.”

I’m counting on the beauty of the beans to grow right around this lattice, hiding the fort’s humble beginnings, and turn this pile of mismatched lumber into a showpiece. And the beans! They’re actually called, Jack and the Beanstalk, and grow to 20 feet. I hope Mother Nature lets me see that. 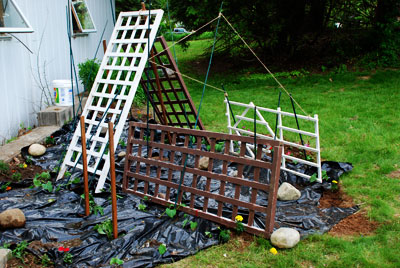 With my son’s great eye for design, I let him decide where the lattice pieces should go, the size of the fort, and the general layout. After my Dad taught me the proper way to lift the sod, I quickly heeded the developing blisters in my hands and made the fort about half the size of my original intentions. Dad actually did most of the sod removal… he’s strong for a 68-year-old. I was no match for him. He took me to the hardware store and showed me the claw, which really helped to work in the peat moss we poured into the sandy soil to help it hold the water better. I spent more time working while my Dad was here than entertaining him. I feel a bit bad about that, but there was really no way around it. Truly, he does prefer to sit and talk while he’s here, which I did, but honestly, I think he was relieved when my brother offered a 3:00 round of golf.

Inspiration and a little more research into a garden book I bought along brought me the idea of using large plastic garden bags as mulch. Not only will these help keep the weeds down, but the black will hold in the heat to help the plants grow better, and hold the water in the soil. Perfect for the long absences I’ll have when I’m unable to water the plants. 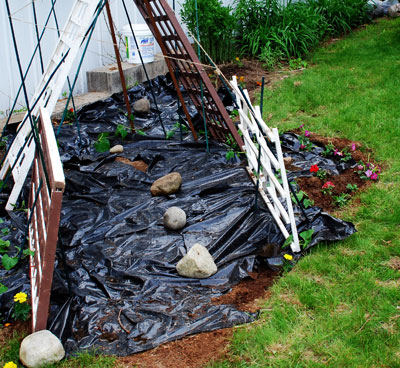 Adding plastic to the soil created much more prep work than I anticipated. The first problem is that there was no trowel anywhere to be found. So, once the plastic was down, (I cut up contractor’s garbage bags), I used the claw end of a hammer to tear a hole in the garbage bag that was big enough to fit the developing seedlings through. The claw of the hammer had too much of a curve in it to dig the hole, so I tried a screwdriver – not enough of a curve. My fingers worked the best. Using my hands, I dug the sandy-peat soil for just about every plant. This seemed to take forever. While digging, I continually asked the boys to bring up rocks from the lake to hold down the plastic. Still, I felt like the Little Red Hen.

So now I’m 3 hours away from the fort, unable to water the seedlings. I’m counting on the black plastic to keep them from drying out. Farmers do this all the time… they can’t water their seedlings, and their crops turn out fine, usually. I know this fort is ugly; but hopefully, that’s temporary. I also know the lake neighbors are driving by saying, “What in the world….” But, they just don’t know the whole story, and it’s just too hard to explain. Still, I’m proud that it’s come this far.

Rosie, The Escape Artist
S...
Making Exactly What I Craved
A...
An SOS meal that feeds the busy soul
H...
Yes, that is me in that magazine
...
Beware Of Clay Recipes
T...
Accessorizing a Dress
I...
Share on FacebookShare on Twitter
clean, Gardening, Life, the lake house, Try This
24 comments to “A sight for sore eyes, and tired dirty hands”