Because the mouse is so small, he can actually crawl back behind the furnace, and get back into the tiny place and reconnect the disconnected wires — and voila, heat. The two children have been without heat since their mom died a couple of years ago, and their absent-minded scientist father has been pre-occupied with his latest invention.

It was so cold, that some mornings, that the children ate their cereal with ice milk.

So Tumtum & Nutmeg, a husband a wife mouse team, who were living like a king and queen in an old cupboard of the house, decided to “care for” the children in the house. They became “fairy godparents” to the children. 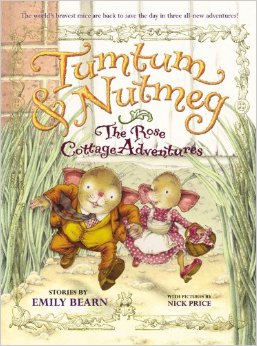 Tumtum and Nutmeg show up at night, while the children are sleeping, to mend their socks, fix furnaces, and tidy up their rooms. They leave notes, to let the children know they are thinking of them. Sometimes, they would leave a chocolate bar, the size of a RAISIN, under the pillow, when one of the children lost a tooth.

Tum tum and Nutmeg couldn’t have children of their own, so they have “adopted” these two children and taken them under their wing. The children have never seen their fairy godparents, and are unaware that they are actually, “mice.” They think they are fairies. Yet, the children were horrified the children’s aunt came for a visit, spotted the mice and set out to destroy them.

Tumtum and Nutmeg learned of the sinister plan just in time, and called in the community of mice, including a general, to deal with the aunt. But, after the mice had to come to terms with the fact that humans are afraid of mice. This puzzled the mice so much — why would they be afraid of us — it’s not as if we are wielding swords or weapons of any sort!

We have been relishing in this series since last spring — reading just enough here and there to give us something to feed our imaginations — “I wonder how big the bacon is that she is frying up in that pan?” We are not too old for picture books — just too busy for them. Last night, Tumtum and Nutmeg met a particularly menacing character, a RAT, who is described as a Pirate, with a dragonfly sitting on his shoulder… instead of a parrot.

What Fits on an Index Card?
T...
Cute Tips
S...
Finding a Way to Make My Eyes Twinkle
I...
The Easiest Method for Storing Bone Broth
T...
The Blizzard of 2008
A...
Regatta
...
Share on FacebookShare on Twitter
clean, Laugh, Life
One comment to “We Are Not Too Old for Picture Books — Just Too Busy for Them”